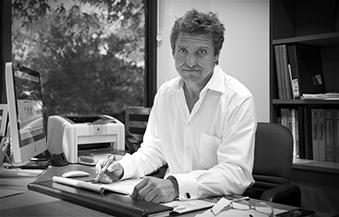 Dr. Keith Noack trained as a general Gastroenterologist at the MAYO Clinic in the USA from 1989-1992 having previously been trained as a general Physician at the Parkland Memorial Hospital in Dallas, Texas. While working at the MAYO he developed an interest in liver disease after working in the liver transplant unit and subsequently worked in the lab of Dr Greg Gores working on the effects of oxidated stress on liver cells. He went to work as a consultant at the Brigham Women's Hospital/West Roxbury VA in Boston for a year and a half while his partner completed her Neurophysiology studies. When she was offered a position at the Neurology Unit at the Royal Melbourne Hospital they decided to move permanently to Melbourne. After spending several years training in ERCP with Tony Speers and Neil Collier at Royal Melbourne Hospital he took a position at the Alfred Hospital. He has been working in the Gastroenterology Unit at the Alfred since 1994 where he currently works in the Hepatitis C Clinic, performs an ERCP list, takes call on the bleeding service as well as ward service.

He joined Jeremy Ryan in private practice in 1997 and has been at Brighton Gastroenterology since then. While he has expertise in hepatobiliary disease and pancreatic disease he is quite happy to see patients with any general gastroenterologic problem. He has endoscopic sessions and admits privately to Cabrini Hospital in both Brighton and Malvern, Epworth in Richmond and Freemasons in East Melbourne.